Subscribe today and have important Alerts delivered directly to you via email and or text!&... END_OF_DOCUMENT_TOKEN_TO_BE_REPLACED

THE FOLLOWING HISTORY WAS TRANSCRIBED FROM "EARLY LIFE AND TIMES IN BOONE COUNTY INDIANA" COMPILED BY HARDEN & SPAHR LEBANON, IND. MAY, 1887.

No one could write up the early events of the county and forget the above town, for it is located on historic ground. Not only was it here that the first settlement took place by the whites, but it was the early home and scenes of the red man and the French trader and trappers for perhaps near one hundred years. Here the Indian built his hut; here the braves wooed their dusky mates, and the war dance and songs were: indulged in for years before the whites came to make a settlement. Reader, let us go back sixty years. What do we find -- here and there a cabin or a vacated wigwam, left by the retreating Indians. About this time a few hardy pioneers settled on Sugar Creek, where the now thriving town stands. Slowly but surely it has advanced - first the cabin, then the hewed log house, then the frame and finally the brick mansion has come to take the place of those rude structures. It has taken time to bring about these changes. Many have fallen by the way. But few if any now remain who were actors in the first settlement of Thorntown.

When the railroad was completed here it was the signal for general improvement, and its future became a fixed fact. Up to that time it was the trading point in the county, outrivaling the county seat, Beautifully located on Sugar Creek, on one of the best sites in the state, amidst one of the finest countries in the state, could not be less than a good town. With its natural advantages it at once and all the time takes rank among the towns of the great State of Indiana.

Thorntown is known far and wide as one of the healthiest places, as well as the most desirable to live in, to be found anywhere. From its few cabins 1829, it has grown to be a little city of 1,500 inhabitants - industrious, intelligent, thorough-going citizens. The people are justly proud of their place, with its bright past; its future is no less prosperous. At this writing, February, 1887, preparations are being made to dig for natural gas, which is now agitating the people in our state. Thorntown was the first in our county to move in this direction. Let us hope her most sanguine expectations may be more than realized, and that light may soon come to them. Following will be found a letter to the Lebanon Patriot, written December, 1886, which will give some very interesting facts in regard to Thorntown and vicinity, which will account for this seeming short article. This thriving little city is the oldest in Boone County. In the year 1827 a settlement was commenced in this vicinity, and in 1831 the town was surveyed and platted by one Cornelius Westfall. As far back as 1719 there was an established French and Indian trading post at this point. From the year 1840 to 1875 there was not a licensed liquor establishment in the place, and spirits could only be had at the drug stores. "

The first church (Presbyterian) was organized in 1831, with Clayborn Young as its minister. The first Sabbath school was organized in 1834. Rufus A. Lockwood, of whom the Indianapolis News recently gave an interesting sketch, was the first attorney at law in the town. Relatives of this once famous and eccentric lawyer are still living here. The first school house was built in 1834, and was undoubtedly the first school house in the county.

Today Thorntown has one of the finest and best arranged schools in the state, with 375 pupils. Prof. Linnius Baldwin, of Hamilton County, is the present principal, with the following corps of efficient teachers: H. C. Heal, Nelson Hetherington, Frank Moore, Mrs. Mary Gaddis, Miss Kate Beck, Miss Stella Horner and Miss Mattie Matthews. As above slated, the first church organized was the Presbyterian. This church has a membership of about 200, with Rev. Samuel Sawyer as its minister. The Methodist Episcopal Church has a membership of about 375. Its pastor is Rev. Isaac Dale, of La Porte. The Baptist Church has nearly 100 members at present. This church has no regular minister. The Christian Church has a membership of about 70. It also has no regular pastor. The secret societies are also well represented: Thorntown Lodge No. 113, F. & A. M., was organized in 1852, and to-day has a membership of 85. Osceola Lodge No. 173, I. O. O. F., was organized in 1856 and at present has a membership of 85. This order has a beautiful hall, which it erected in the year 1873, at a cost of $5,000. Moriah Encampment No. 83 has 60 members. Eden Lodge No. 149, Degree of Rebecca, has 50 members. Less than two years ago, through the efforts of a few of our young men, a Knights of Pythias Lodge was instituted here, with a membership of about 30. The growth of this order has been phenomenal. Today they have over 100 members, nearly all young men. This order has suffered a loss of one member (Mr. Frank Morton) since its organization. They have a neat and comfortable hall, recently fitted up, and are in an exceedingly prosperous condition. The P. E. & Q. Fraternity, composed entirely of ladies, was organized in 1885. Nothing can be learned regarding this society, as the members will not even give the meaning of the mystic letters representing their order. The Grand Army of the Republic also have a neat hall and have about 50 members. The Knights of Labor have an organization here, but we fail to get any particulars regarding their order.

The legal profession is ably represented by the following gentlemen: P. H. Dutch, Samuel M. Burk and Abner V. Austin. Solomon Sharp, L. B. Moore and M. M. McDowell are the gentlemen who deal out justice to suit the occasion. Our meat markets are operated by Dan B. Buser, Charles Buser and Albert Jaques. Witt & Kleiser are proprietors of the steam roller flouring mills. The steam sawmills are owned by Moses Hardin. Photographers -- M. A Keeler and Fred Hoffman. N.W. Weakly has for twenty-five years, and is still, managing the interests of the "Big Four" at this place. Our corporation affairs are managed by the following gentlemen: City Board, A. C. Clark, M. C. Moore and A. S. Stahl; Clerk, T. E. Bradshaw; Treasurer, James Hanna; Marshal, Green McDaniel; Township Trustee, Isaac Wilson. In conclusion we will say that we have a beautiful little city and by far the prettiest girls of any town in the state."

We must not forget the Arguss, so long and ably published by F. B. Rose. It speaks for itself every week, and is hailed with delight every issue, by its hundreds of readers. It is one of the fixed institutions of the lively little city of Thorntown. Long may it live

This county was once the abode and hunting ground of the Eel River tribe of the Miami Indians; here were their wigwams, their fields, and the graves of their fathers and their brave warriors. In 1819, Thorntown (Kawiakiungi) had a population of 400 Indians and a few French traders, and the large reserve, approximately 64,000 acres, at this place was not finally purchased until 1828, nor did they remove entirely until about 1835.

A historical marker on the north side S.R. 47 about a half mile east of town marks the burial grounds of the Eal River Tribe of the Miami Indians. The Eel River Indians were named for a tributary of the Wabash River in Indiana. They, along with the Wea and Piankashaw, were an Algonquian people and a subgroup of the Miami. No longer an identifiable tribe, their descendants may presently be among the Miami Nation of Oklahoma. First reported in 1765, the village of the Eel River Indians was located six miles above the confluence of the Eel and Wabash rivers in present Cass County, Indiana. They subsequently moved to the Eel's mouth, where Kentucky militiamen attacked them in 1791. Their settlement destroyed, the tribe relocated along present Sugar Creek in Boone County, Indiana.

Hostilities between them and the United States continued until the Battle of Fallen Timbers in 1794. The United States recognized the Eel River Indians in the treaty of Greenville, Ohio, in 1795. Other important agreements were negotiated in 1818 and 1828. The former provided the tribe with a ten-square-mile reservation along Sugar Creek near Thorntown, Indiana. The latter exchanged their Sugar Creek land for acreage in present Miami County, Indiana. The federal government had designated the Miami, Eel River, and Wea "the Miami Nation of Indians" in 1814. The Eel River, however, were granted a separate status in 1847. That decision allowed them to remain in Indiana after the Miami were removed west in 1846-47. Never numerous, the Eel River population was nineteen and mostly female in 1851. Sixteen resided in Indiana, and three lived with the Miami in Kansas. The Kansas trio and/or their offspring accompanied the Miami to Indian Territory present Oklahoma) in 1873 and enrolled as Miami in 1889. 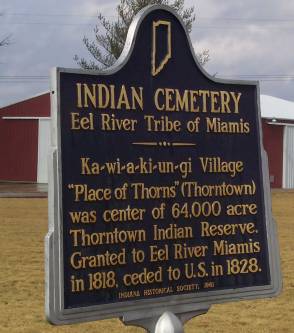 This small company connected Thorntown with Lebanon (10 miles), an important junction on the Indianapolis and Northwest division of the THI&E. The line was opened in July 1905, and throughout most of its history two small Cincinnati Car Company combines provided service on a two-hour headway. The road survived until July 6, 1926. One of its cars was sold to the THI&E , and the right-of -way passed into the hands of the parallel Big Four Railroad. The rail head in Thorntown was on South Market Street just before Main Street (between the current Police station and Chris Cuts barber shop in Market street.)

Click the calendar for meeting times and upcoming events